Manage Versions of Your Zapier Integration

Your Zapier integration should be quite nice when first launched—minimal, perhaps, but with the basics covered. The app authentication will let users connect to your API, and the triggers and actions should get data to and from your API.

Over time, though, things will change. Users will request new triggers and actions, or want to send and receive more data with your existing ones. You’ll add new features to your app and want to add them to your Zapier integration, too. And eventually, your API may change, and your Zapier integration’s authentication or API calls may need to be changed as well.

That’s where versions come in. Zapier lets you create multiple versions of your integration to test and build new features without interrupting existing users. You can then release the new version to some users, ensure everything is working, and eventually migrate all of your users to the new version. After that, you can deprecate and remove the old version.

Zapier’s Platform UI includes a Versions page in the left sidebar. New integrations provide a starter 1.0.0 version, and you can create other versions as needed.

Click the gear icon beside a version on the Versions page to make changes. You can Clone your integration to make a new version based on the features of an existing version. Once the new version is ready, you can Promote the new version to have new users start using it. 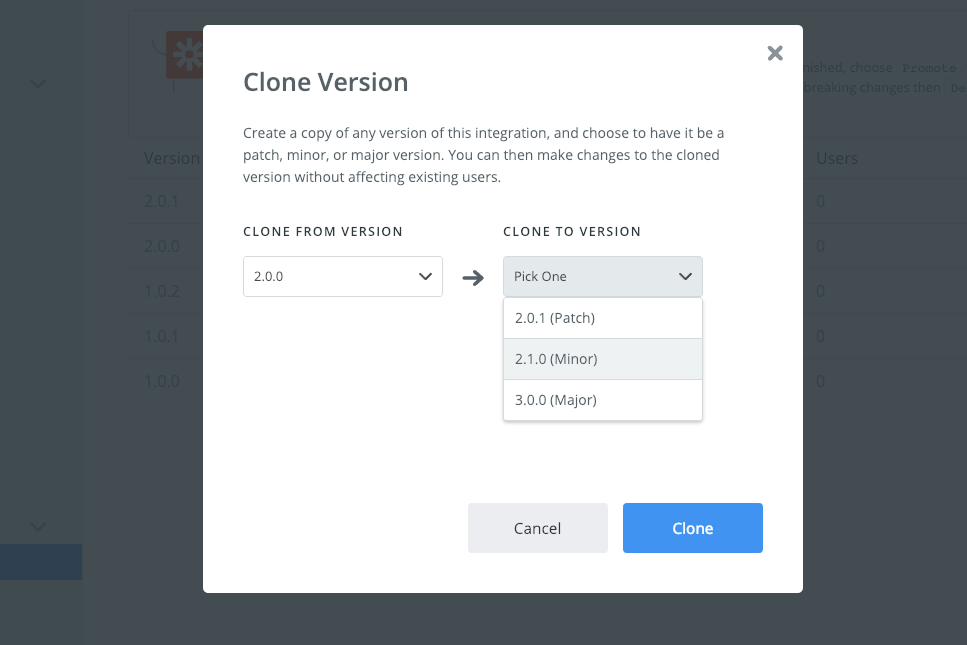 When creating a new version of your Zapier integration, you never need to start over. Instead, to make a new version, start by cloning an existing version. That lets you start with an exact copy of your integration where you can make the changes and additions you need.

To clone a version, click the gear icon in the Versions page, and select Clone. In the dialog, select the version to clone from (usually the most recent version, unless you want to roll back recent changes). Then choose what type of version you want to create:

Once you clone the integration, click the Edit button to tweak the new version of your integration, or click Close to go back to the Versions page.

Edit a Version of Your Integration

To edit a specific integration version, either select it from the upper left of the Platform UI sidebar, or open the Versions page, click the gear icon beside the version you want to edit, and select Edit. You can see what version you’re editing from the version number in the top left of the sidebar anytime.

You can also test any version of your integration from Zapier’s standard Zap editor. Search for your app name when adding a Zap step, and Zapier will show multiple entries on your account with the version number beside each. Select the newest one to test your new changes. 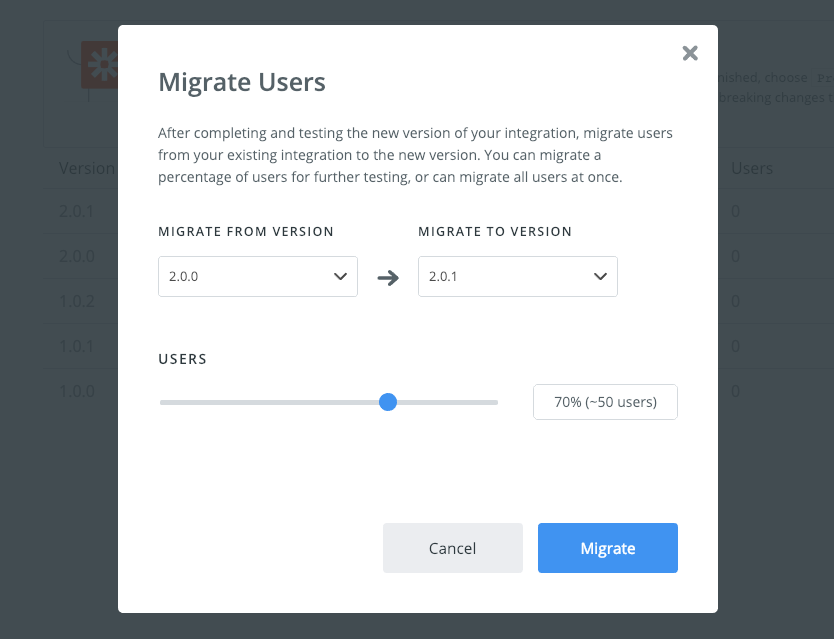 Once you’ve added all the changes needed to your integration, you can start rolling it out to users to update their existing Zaps and let users make new Zaps with your new integration features.

Typically, Zapier recommends moving a small percentage of your users—perhaps 10 or 20%—to the new integration version to make sure everything is working as expected. Once everything looks good, you can migrate the remainder of your users to the new version.

Major versions of integrations—especially if authentication or API calls were changed and other breaking changes were added—will require users to re-create their Zaps with the new version of your integration. In that case, you won’t be able to migrate existing users. Instead, you’ll need to promote the new version and deprecate the old one so new users and Zaps will be made with the new integration.

Promote a New Version of Your Integration

If you’re working with an integration that’s currently private, the Promote option isn’t used. Instead, make sure users you’d like to test or move to the new integration version are invited to that version, and encourage them to try it out.

Deprecate an Older Version of Your Integration 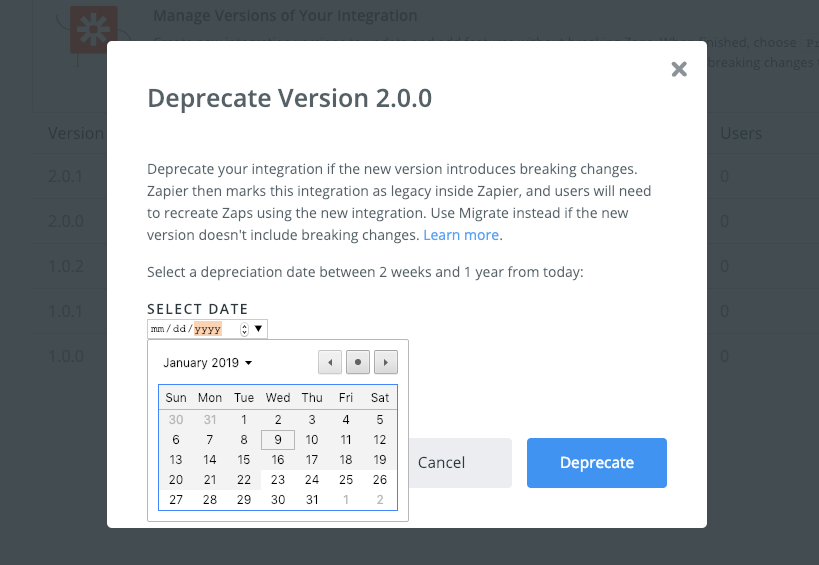 If you did introduce breaking changes to your integration and want existing users to switch to the new version, you can deprecate the old version. That will let your older integration and Zaps that use it continue to run—but they will include a (Legacy) tag in the Zapier editor to prompt users to re-build the Zap with the new integration. Additionally, when adding a new Zap step, Zapier will no longer show the older, deprecated version of your integration as an option.

To deprecate a version, select Deprecate in the Versions menu, then select a date to deprecate the integration in the calendar drop-down. Choose a date between two weeks and a year from today, then click the Deprecate button to confirm.

Zapier then shows a yellow exclamation mark beside that version in your integration’s versions menu, showing the date it will be deprecated when you hover over it. You’ll also see your user count as it goes down, switching from the old integration version to the new.

Delete Older Versions of Your Integration

Once you’ve deprecated an integration version and it has no existing users, you can delete that version to clean up your Zapier integration.

Click the Delete button in your version’s gear menu, select Really? when asked to confirm, and Zapier will remove that version of your integration. Since Zapier will only delete deprecated versions with no users, you never have to worry about accidentally removing a version that’s in active use.