Why should I convert my Zapier app to the CLI?

The Zapier CLI was built to address the feedback we heard from many developers about ways to make it easier to build and manage a successful Zapier application over time. Some of these improvements:

What do I need?

Some familiarity with Javascript. If you did custom scripting in your Web Builder app you’ve got what it takes! If you need a refresher on JavaScript, we recommend reading this guide. A big difference in code from Web Builder to CLI is that the CLI uses asynchronous requests when it calls your API, so if you’re new to promises it’s a great idea to get a bit more familiar with them, as well as some other ES6 basics.

Any recent version of Node.js. An easy option to get set up with Node.js is to visit https://nodejs.org/en/download/ and download the official installer for your OS. If you’re installing with a package manager it’s even easier.

Step 1) First, install the latest version of the CLI.

Make sure you’ve installed the latest by running in a terminal window:

Learn more about getting set up at https://zapier.github.io/zapier-platform-cli/#getting-started.

From your terminal command line run

When prompted use the email address and password that you use to login to zapier.com.

This will configure authentication between your dev environment and the Zapier platform. This command will set up a .zapierrc file in your home directory. 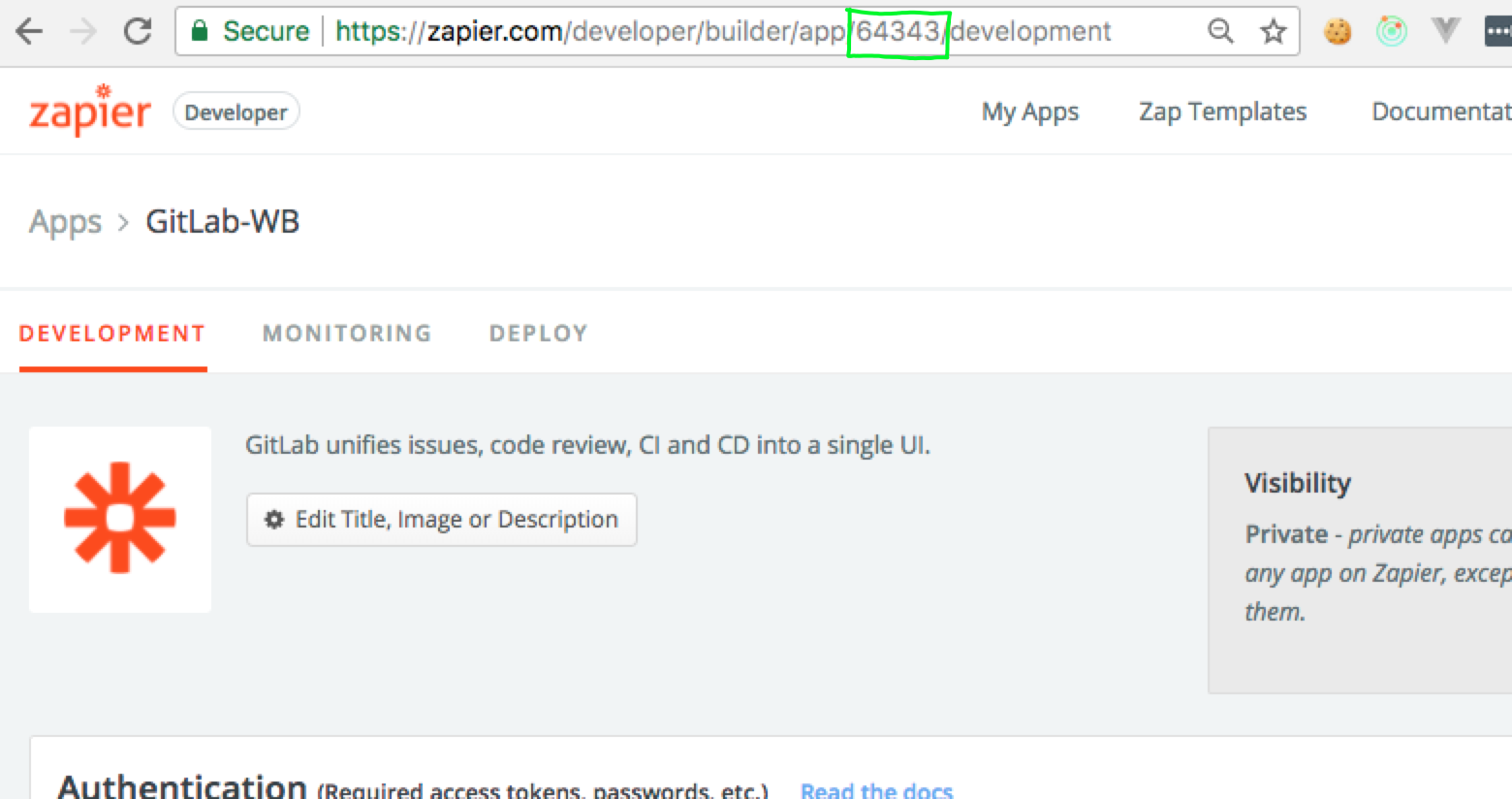 From the terminal run

where “1234” is the web builder app id you located in step 2, and “your-new-cli-app-dir” is the local directory that the generated code will be placed.

What did we just do here?

The zapier convert command grabbed your Web Builder app definition and custom scripting file and used that to generate a version of your app in your local dev environment.

At this point it’s just code in your local environment. Your Web Builder app is unaffected by running convert. In addition, the CLI platform is unaware of this new, generated app until you run zapier push. (We’ll do that in step 5!)

When you open up your new project folder you’ll see a collection of new files and directories similar to:

Some key files and directories to note:

In the terminal cd into your new project directory

cd into the directory of your new CLI app and run

This will check the structure of the app that was generated and make sure there aren’t any identifiable problems. Check out “Common issues and how to fix them” below if this command reveals errors or warnings.

will register your app with the Zapier platform and upload your code. Once you run this command you’ll be able to see your app on your dashboard at https://zapier.com/developer/builder.

Your app likely has some “environment variables” set up in order to function. For example if your app uses OAuth, the CLIENT_ID, the CLIENT_SECRET, the AUTHORIZATION_URL, the REFRESH_TOKEN_URL, and the ACCESS_TOKEN_URL will need to be configured through environment variables. In Web Builder these particular values were set in the UI behind the “Manage Authentication Settings” button, and these sensitive values were not brought over when your app was converted.

Look for places in your CLI code where environment variables are used. Any reference to process.env.VARIABLE_NAME is one that you’ll need to define.

To set env variables you’ll use the zapier env command:

For details on how to use the env command check out https://zapier.github.io/zapier-platform-cli/cli.html#env or run

Environment variables are a cool new feature in CLI that easily allow you to have different versions of your app that point to staging and production environments, for example.

Once your new CLI app is pushing without errors and you’ve configured your environment variables, it’s time to test it out! You’ve been developing and testing Zapier apps with the Web Builder by creating test Zaps and making sure everything works the way it’s supposed to. Zaps created with your CLI app should work just the same from the user’s perspective. You’ve probably got a suite of test Zaps you use to test your Web Builder app. You might just copy those in the editor, and go in and replace your Web Builder app with the new CLI version you just pushed. Hint: you might need to search for it in the app selection UI.

One difference between Web Builder and the CLI is the way you’ll get logging and debugging into. In Web Builder you’d view debug information from the Web UI. In CLI you’ll look at your logs from the command line with the following command:

Run zapier help logs for information on the various options available. You can filter to see http logs, or the console logs - debug statements you added to your code with z.console.log statements. You can limit the number of rows returned, get detailed info with --debug. You can even look an one of your users logs if you know their email address.

Step 10) Check out the tests

Creating test Zaps and making sure that the user experience matches what we wanted for our users is essential. But what we’d like is an automated way to test our code every time we make a change to catch as many errors as we can before we ever even push our code. Good news! This is a feature of the CLI platform and your converted app includes some scaffolds of automated tests to give you a head start building out your automated test suite.

Zapier CLI testing is based on the popular mocha framework (https://mochajs.org/). If you have a look in the /test directory you’ll find a test files for each of your triggers, actions, and searches. The following command will run each test and indicate if there was a problem.

The convert command created a test file for each of your triggers, actions, and searches, which only covers the basic test scenarios. You’ll need to go in and add the logic to the test code to ensure that each one actually indicates that the operation is doing what it’s supposed to.

Migrating your production users to the new CLI version

When you’re happy with the new CLI version of your app and you’re ready to start migrating your existing production users over to it, contact us at partners@zapier.com.

If you haven’t added custom scripting to your Web Builder app, then the CLI project that gets generated will be largely consistent with they way that you would have written it from scratch in the CLI. If you’ve introduced WB scripting to your app you’ll see:

Common issues and how to fix them