Some APIs require additional data to authenticate or connect to your app. You may need a custom API key to pass to the API, along with users’ authentication credentials. Or you might want to set a sub-domain, role, user permissions, or other API configurations differently for your beta integration and live, active versions of your integration.

How to Add Environment Variables 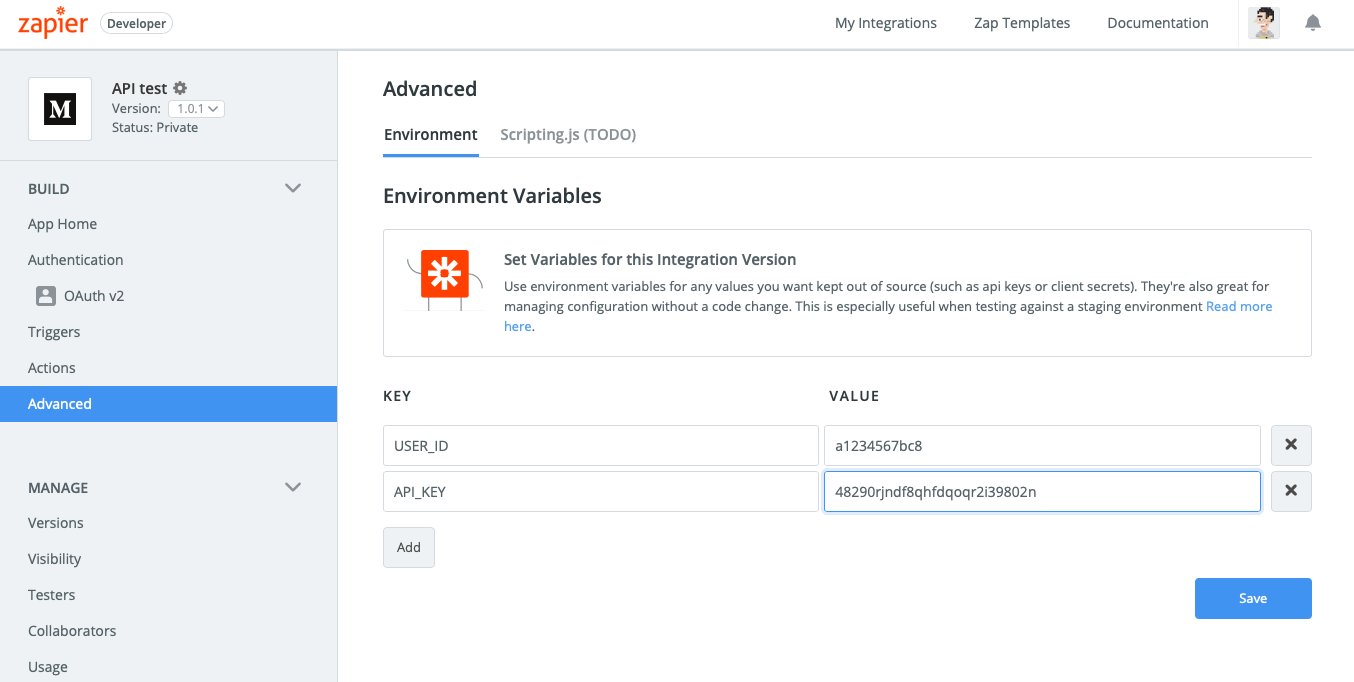 Add any environment variables you need in key and value pairs

How to Reference Environment Variables

Zapier will then replace that variable with the value for that key from your Advanced settings—and will use the correct value every time if you change it in the future.

You can reference environment variables directly in your API calls the same way—though it’s best practice to include them in Zapier’s default request body instead. You can also reference them in custom code if you switch your API call to code mode.

How to Change Environment Variables 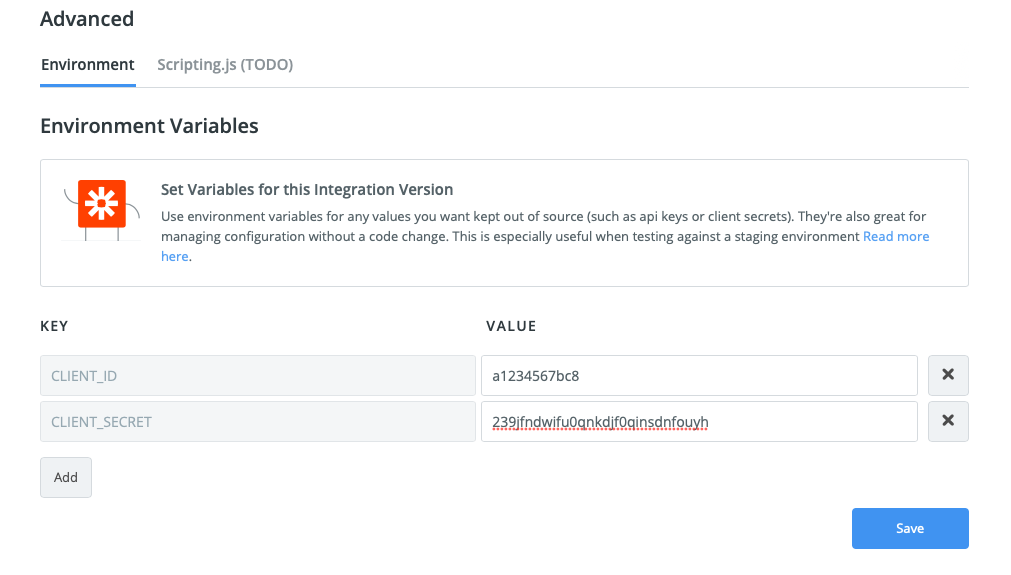 You can change environment variable values, but not the original keys

Need to change your environment variables for a new version of your integration, or before releasing your beta integration to the public? Open the Advanced page in Zapier visual editor, and this time edit the text in the Values column with the new variable values. You cannot edit the keys.

If you need to change a key and its value, first delete the old key, then add a new one instead. 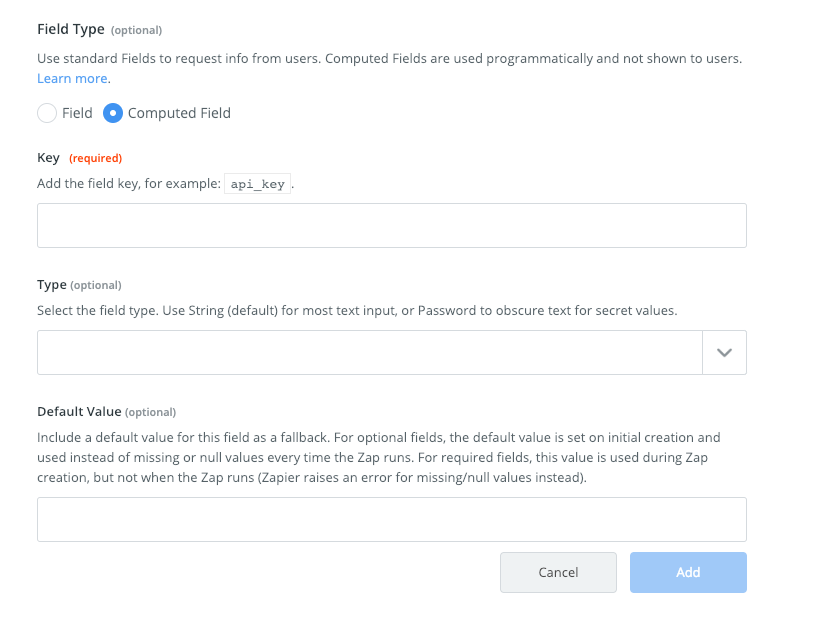 When adding an input field in your integration’s authentication, Zapier includes a Field Type option with two field options: Field and Computed Field. The former is a standard input field much like those in the trigger and action input designer, where users enter info needed for authentication.

Note: Only use Computed Fields with Session and OAuth v2 authentication.

Computed Fields, on the other hand, store values returned by your integration’s authentication response, so they can be referenced in subsequent API calls. Use the same field key as the name your API uses for this field.

Zapier stores all fields returned by the authentication process. Computed fields are marked as required, so Zapier watches specifically for those fields in the response data. If the auth process does not return fields marked as computed fields, Zapier will show an error.

For example, when using OAuth v2 authentication, Zapier will store all fields returned by the getAccessToken request. If an access token is not included in the response, or any computed fields are missing, it will show an error. You could therefore use a computed field to reference a value that the getAccessToken call returns if you need to use it in subsequent API calls.

You can reference the field in any subsequent API call from your integration from the input bundle with the following text, replacing field with your field key:

How to Use a Field From the Test API Call as a Computed Field?

Zapier stores every field from the core API authentication calls in OAuth v2 and Session auth, but does not store the responses from the test API call. If you need to use the data from a test API call later in your Zapier integration, you need to instead have Zapier call that API endpoint as part of your Token Exchange Endpoint or Authorization URL code.

To do that, use the Code Mode option and add custom code to have Zapier call both the URL needed for the authorization step and your test API call. You can then include computed fields for data returned from either API call and reference them in later steps.

Zapier stores data from users’ authentication and input forms for API calls in the bundle object. You can reference that data in your integration using {{bundle.bundleName.field}} text in API requests and connection labels, replacing bundleName with the bundle name and field with the input field key or API response field key you need. You can also reference bundles in custom code if you switch to Code Mode for a request, using the same name but without the curly brackets, for example return bundle.bundleName.field; to have JavaScript code return a specific field.

If an API response includes a nested field, you can reference it as field.nestedfield, for example {{bundle.inputData.data.name}} to reference a name nested field inside the data field.

Zapier integrations include the following bundles:

However, note that the authData bundle does not support nested objects: all values returned from auth functions need to be at the top level.

In triggers and actions, inputData contains the data that users enter into the input forms, with {{curlies}} (mapped fields from previous Zap steps) rendered with their raw data. Zapier passes these inputs to the app for use with that trigger or action.

If you want the input field data with the original {{curlies}} and not the data from previous steps, use {{bundle.inputDataRaw.field}} instead.

Note: bundle.rawRequest and bundle.cleanedRequest are only available in the perform for webhooks and getAccessToken for OAuth.

Use bundle.rawRequest if you need access to header data. In bundle.rawRequest, headers other than Content-Length and Content-Type will be prefixed with Http-, and all headers will be named in Camel-Case.

In triggers using REST hooks, this returns the URL a site should send data to, such as https://hooks.zapier.com/1234/abcd.

In triggers using REST Hooks, this includes the data from the performSubscribe function, which is used if you need to send a DELETE request to your server to stop sending webhook data to Zapier when the user turns off a Zap.