Your app can’t do everything. It shouldn’t. Despite every new feature request, the best thing is a clear focus on what makes your app unique.

For everything else, there are Zapier integrations. Zapier is the most popular way to automate tasks through customized workflows with 5,000+ web apps. Using Zaps, what we call automated Zapier workflows, Zapier watches for new or updated data in connected apps, then use that data to do tasks in that or other connected apps. Zaps let your app rely on other best-in-class tools to do the extra things your users want, freeing your app to focus on its core features.

And it’s not much harder than building a form.

What is a Zapier Integration?

Zapier integrations are different from standalone apps. Say you were building a new email app. You would either use Gmail and Exchange’s APIs to connect to their services, or would build in support for IMAP, SMTP, and/or POP3 protocols. Your app would likely need a database to store every email message, a UI to manage folders, and an editor to write or view HTML email messages. It would need to support every core feature an email service like Gmail offers.

Zapier runs in the background, automatically watching for new or updated items in connected apps then using that data to find, create, and/or update items in apps.

Take Gmail’s API for example. It includes API calls to check forwarding and IMAP settings, see the history of a mailbox, undelete messages, and more—along with the more popular options to watch mailboxes for new emails, create new draft messages, and send emails. What should go in Gmail’s Zapier integration?

Those core features would let users automate their inbox and fit it into their ecosystem of apps. Extra Gmail API calls to see the mailbox history or check IMAP settings wouldn’t be nearly as useful, and couldn’t fit well into a Zap.

Your app’s Zapier integration will be the same. Think through your app’s core API calls. Those that surface new data would be great for triggers; if they support lookups and filtering, they may also make great search actions. The API calls to create or update things in your app would make great actions. And the API calls for settings, deleting data, or seldom-used features would likely be best left out—they’re not things users would want to automate on a regular basis.

What do Zapier Integrations Include?

Start with Authentication. Most apps require authentication, from API keys or usernames and passwords to OAuth login flows. When building a Zapier integration, first tell Zapier how to authenticate your apps’ users. Set this once and Zapier will use the same authentication scheme for every API call it makes. The same goes for users: Once they’ve authenticated your app in Zapier, they can use any of its triggers and actions without authenticating again (unless they wish to add a second account).

Next, decide which parts of your app fit best with Zapier. Anything to watch for new data, find existing data, or add new data would likely fit in well. Figure out which of these are most important to your users and would fit best into automated workflows, and list the API calls and input data needed.

Then turn that input data into forms. Triggers often don’t need extra detail—the API call is enough to get the newest data from your app, and you only need more info to filter that new data (say, to watch for emails with specific labels or from certain mailboxes). Actions, on the other hand, always need data to create new things, the email addresses and names and dates and prices and more Zapier uses to create messages, invoices, events, tasks, and everything else in apps. For that, you need a form. Inside Zapier, users always see a form to fill in data, either with plain text or mapped input fields from previous steps.

You build that form in Zapier Input Designer when creating Zapier actions (and triggers, when they need to filter for specific data). List the data your API endpoints need to create and find items, and make matching form fields in your Zapier integration actions. That together with the action API call will let a simple form in Zapier create anything in your app.

How Does Zapier Work?

Both interfaces use the same Zapier Platform and function the same internally. In general, Zapier integrations include definitions of API calls for triggers that watch for new and updated data, searches that request specific data, and create actions that send new data to an API. Zapier bundles your app definition along with any input data received from users in life Zaps, prepares API requests, includes authentication details, and makes the API call. Zapier then parses the API response for individual fields and deduplicates the results from Trigger and Search steps that expect an array of results.

Zapier then takes action depending on the step. For triggers, if the item is new, Zapier then runs the remaining Zap steps. For searches, if an item exists, Zapier will perform resource hydration, parse its details and run subsequent steps in the Zap; if it does not exist, Zapier may stop the Zap or run a create action to add that item, depending on user selection in the Zap setup. For actions, Zapier will return the results after creating the item, and either run subsequent steps in the Zap if the Zap includes additional steps, or stop the Zap and log this run of the Zap as successful.

Here’s a diagram example of how this works with a trigger step; search and create steps work similarly with their differing final steps as outlined above: 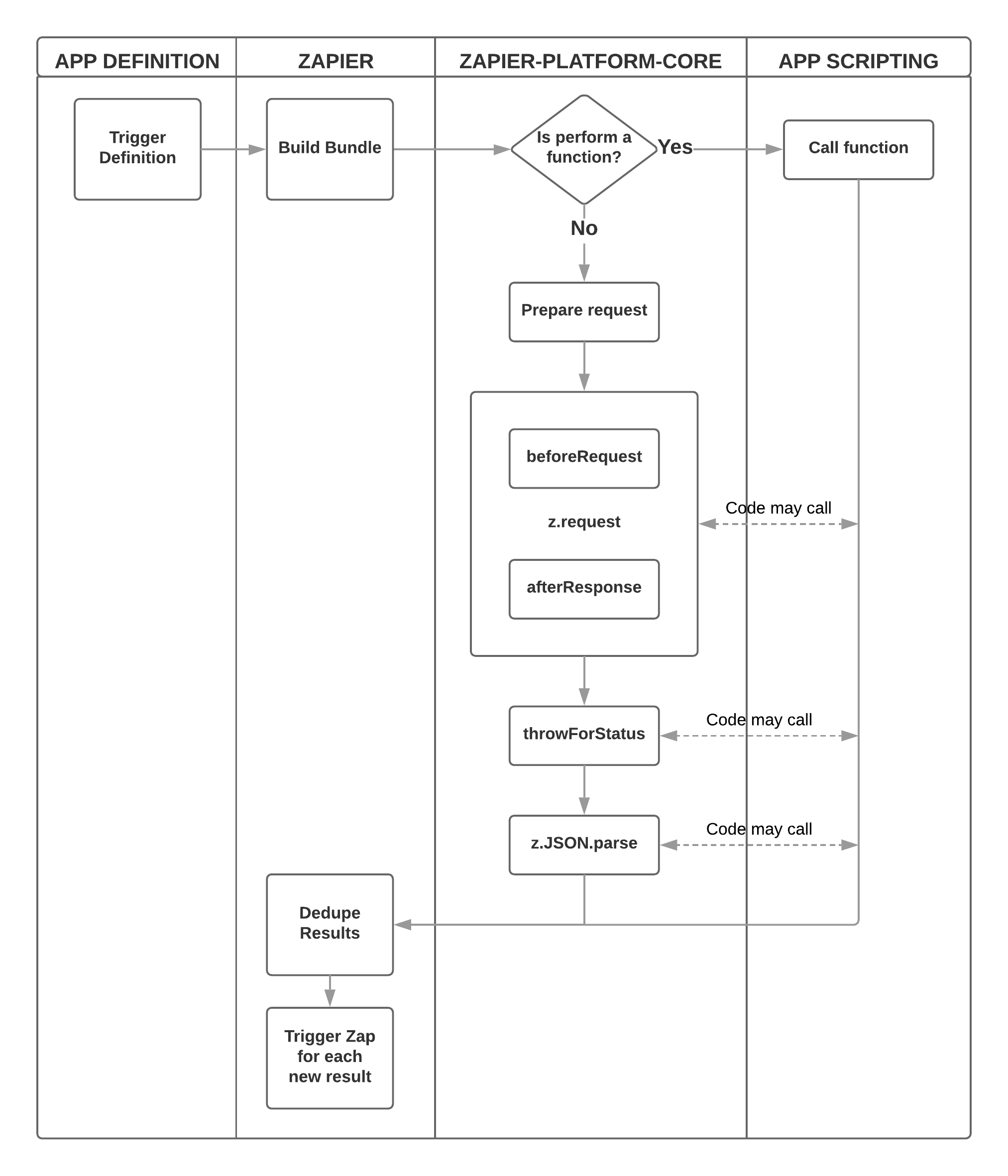 Trigger steps’s internal workflow differs if triggered with a rest hook as well.

Now that you know how Zapier works, let’s build your Zapier integration. Get a quick walkthrough of how with Zapier’s Platform UI quick start guide, or continue to get detailed documentation on every Zapier visual builder feature.