How to Maintain Converted Integrations in Zapier Platform UI

Many things in Zapier Platform UI are similar to the tools you’ve used in Zapier’s Legacy Web Builder, only with a more modern design. You can build full integrations from our form-based editor, often without touching code. If you do need to use code for a custom API call, fetch custom fields, or to parse non-standard response data, you can add JavaScript code for each trigger or action in your app.

Here are some of the main things you’ll notice in Zapier Platform UI: 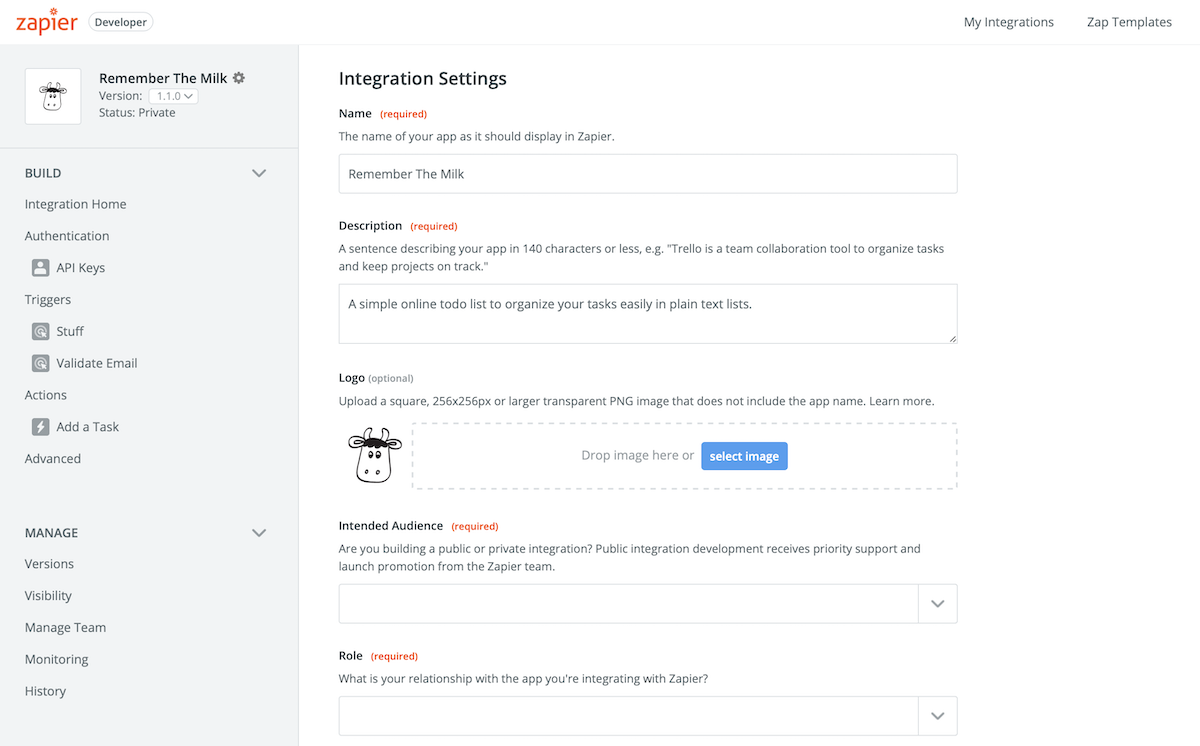 You can manage your app’s branding in Zapier Platform UI from the gear icon beside your app’s icon and name. There, you can add a new logo or Markdown-formatted description for your app, or change your app’s name and capitalization if needed. You can also add a category for your app.

Some of the details may have not been entered in your original Zapier integration. If you change anything in your app branding, you will also need to fill in any additional required fields before clicking Update to save the changes. 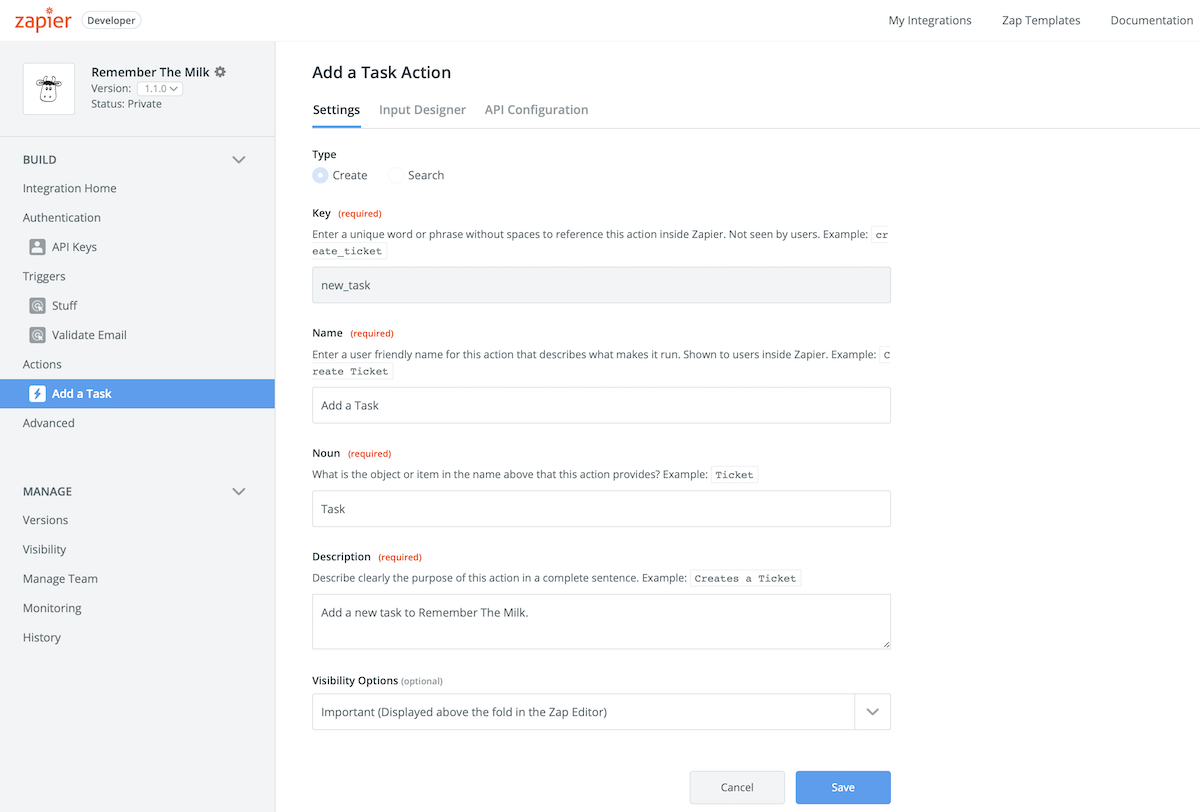 The core details of your triggers and actions are easy to edit in an online form, much like a redesigned version of the editor you used in Zapier’s legacy Web Builder. You will manage the core details in the first tab, add input fields in the second tab, then manage the API call and test it in the final tab.

Searches are now combined with Creates in our Actions editor to simplify your Zapier integration, with Create and Search action types. You cannot change a create action to be a search action, or vise versa, but when you add a new action you can choose which type to add.

You can edit existing triggers and actions, or can add new ones to your integration as needed.

→ Learn more in our Trigger, Action, and Search versus Create docs—though note that the API Configuration will be somewhat different for imported triggers. 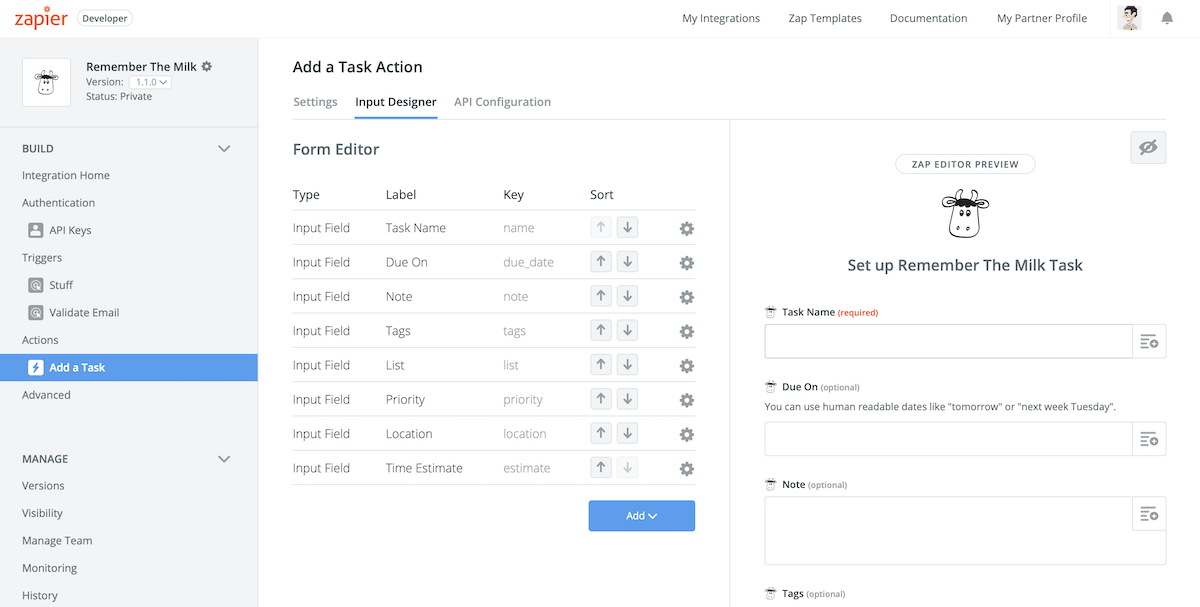 One of the best new features in Zapier Platform UI is the Input Designer. Here, you can design the input fields of your Zapier triggers and actions in an online form builder, and preview how they will look inside Zapier. Imported integrations work the same as new integrations in the Input Designer, so you can update existing input fields, reorder them, or add new fields to your triggers and actions any time.

→ Learn more about how to use the new Zapier Input Designer. 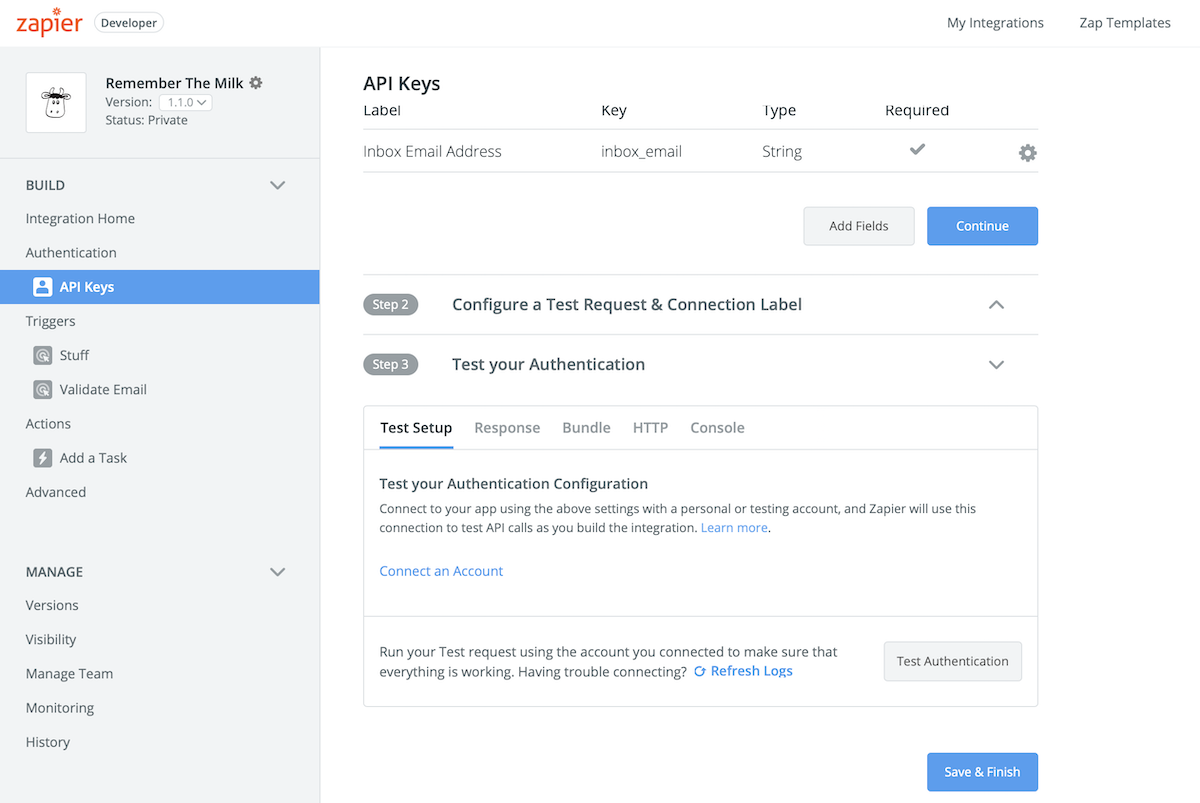 Another Zapier Platform UI feature that will speed up your integration development is built-in testing. Inside the API Configuration settings of your authentication, triggers, and actions, you can add an app account and test each option, then view the data Zapier sent to your app and received in the API call response. If something’s wrong, you can then make changes and re-test without ever leaving the page.

→ Learn more in our Testing docs. 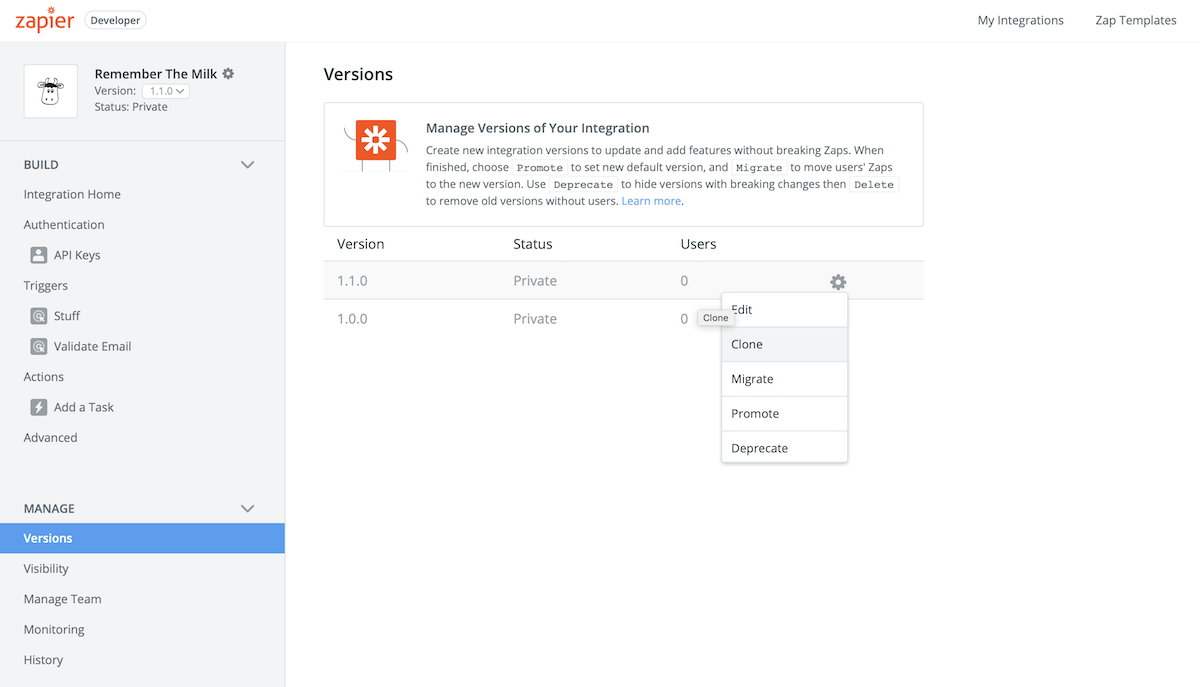 The new Platform UI also includes versioning to build and test new versions of your integration without breaking the integration for existing users. That’s a great way to rework older triggers and actions, or replace your authentication scheme if it changes. You can then slowly roll out the new version to test it with a subset of your users before making it the new default.

→ Learn more in our Versions docs. 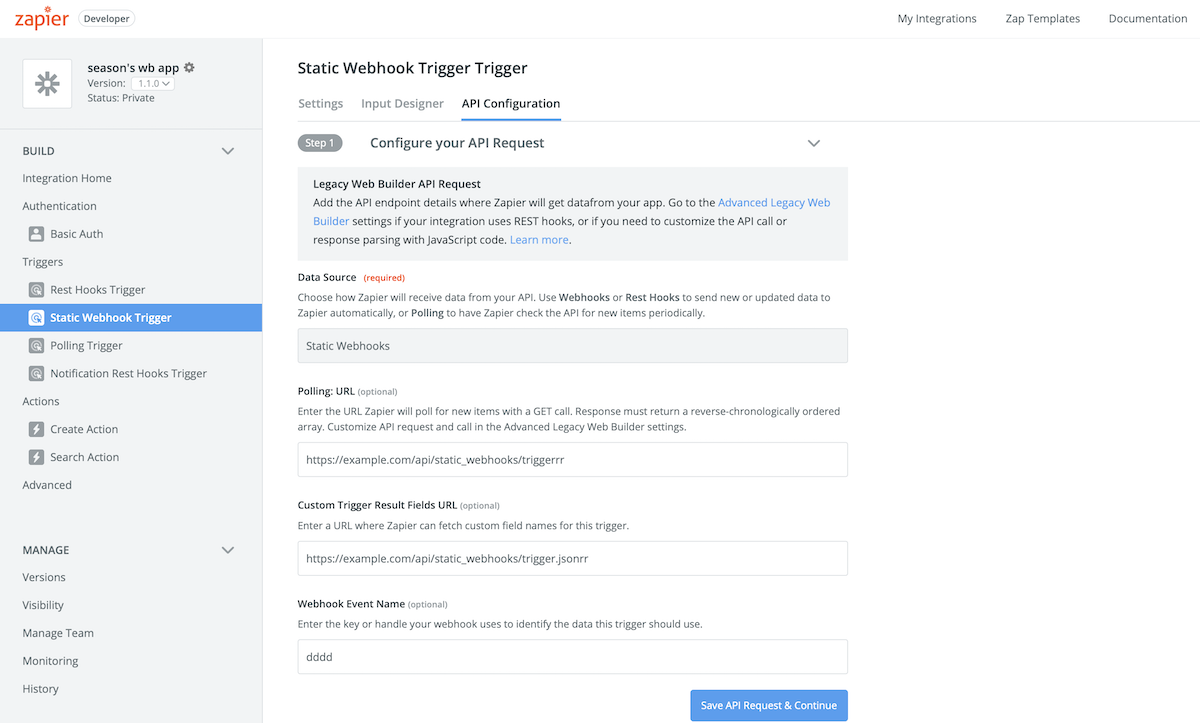 Imported integrations’ API Configuration tab on authentication, triggers, and actions will appear slightly different from integrations (and new triggers or actions) built in Zapier Platform UI. In new integrations, each API field will let you set the API call settings in a form, or switch to Code Mode to add custom JavaScript code for that call and its response parsing.

In converted integrations, however, you will see static text fields for each API call URL. If you need to customize the API call or response bundle parsing, you will need to do so from the Legacy Scripting settings.

→ Check our Legacy Web Builder Documentation for details about the API configuration settings, which are carried over for imported integrations. 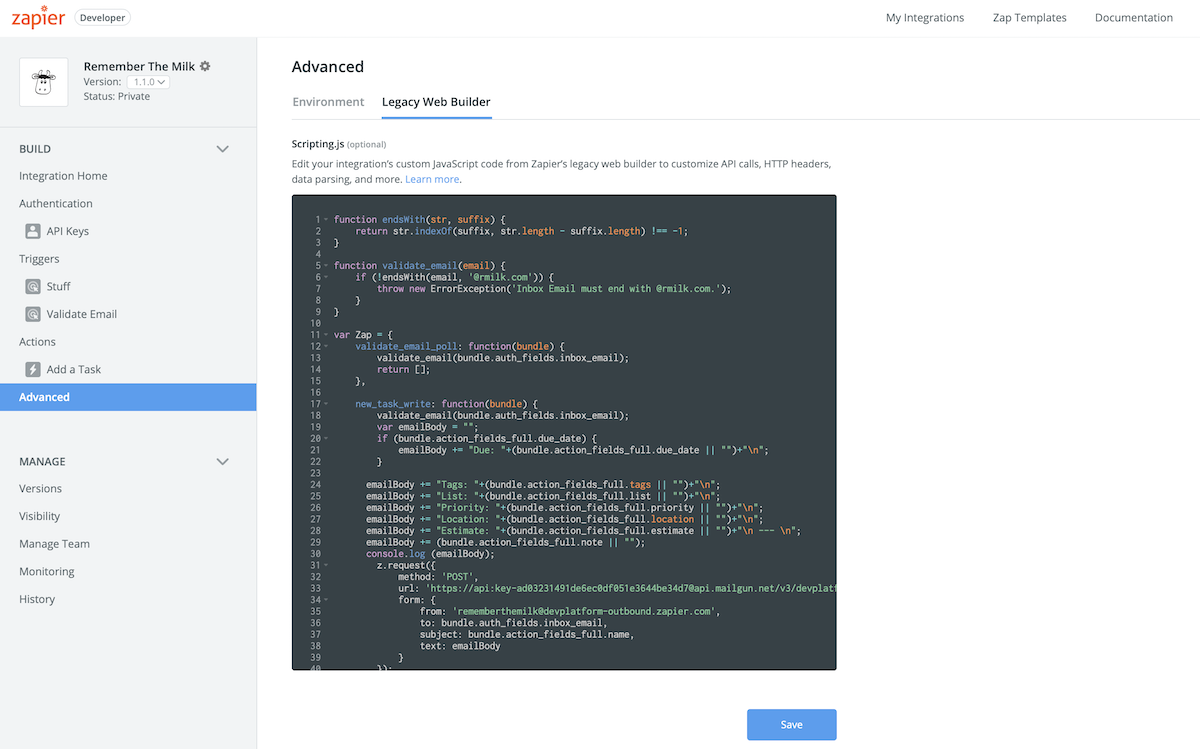 Zapier Legacy Web Builder let you customize your integration’s authentication API calls, trigger and action setup, response data parsing, and more with our Scripting API. That tool is no longer available for new Zapier Platform UI integrations, replaced by Code Mode to customize each API call directly if needed. For imported integrations, though, you can continue to maintain your legacy code using the same Scripting API in Zapier Platform UI.

To edit code in an imported integration, open your integration’s Advanced settings, then click the Legacy Web Builder tab. There you can edit code as before, this time in a redesigned editor that does not take up your full screen. Be sure to click Save after editing your integration code, as Zapier does not auto-save changes.

→ Find detailed documentation on how to edit your integration’s code in Zapier’s Legacy Scripting docs.

What is Not Included in Zapier Platform UI?

Zapier Platform UI includes most of the features you would expect from the Legacy Web Builder, along with new features to help better manage your integration. In converted integrations, you will see some additional features to manage existing authentication, triggers, and actions. If you add new triggers or actions to your integration, though, these features will not be available in the new items, including:

How to Maintain Integrations in Zapier Legacy Web Builder

If you’d prefer to use the Zapier tools you’re accustomed to, you may continue to use Zapier’s legacy web builder to maintain existing for the next few months. You can find your existing integrations on the lower part of the Zapier developer platform at zapier.com/app/developer under the Integrations Built with Legacy Web Builder header.

To clean up the legacy integrations list and remove incomplete integrations you no longer need, click the gear icon and select Delete beside any non-public integration.

Or, to edit integrations, click their entry in the list, then select the Development tab to see the Legacy Web Builder. 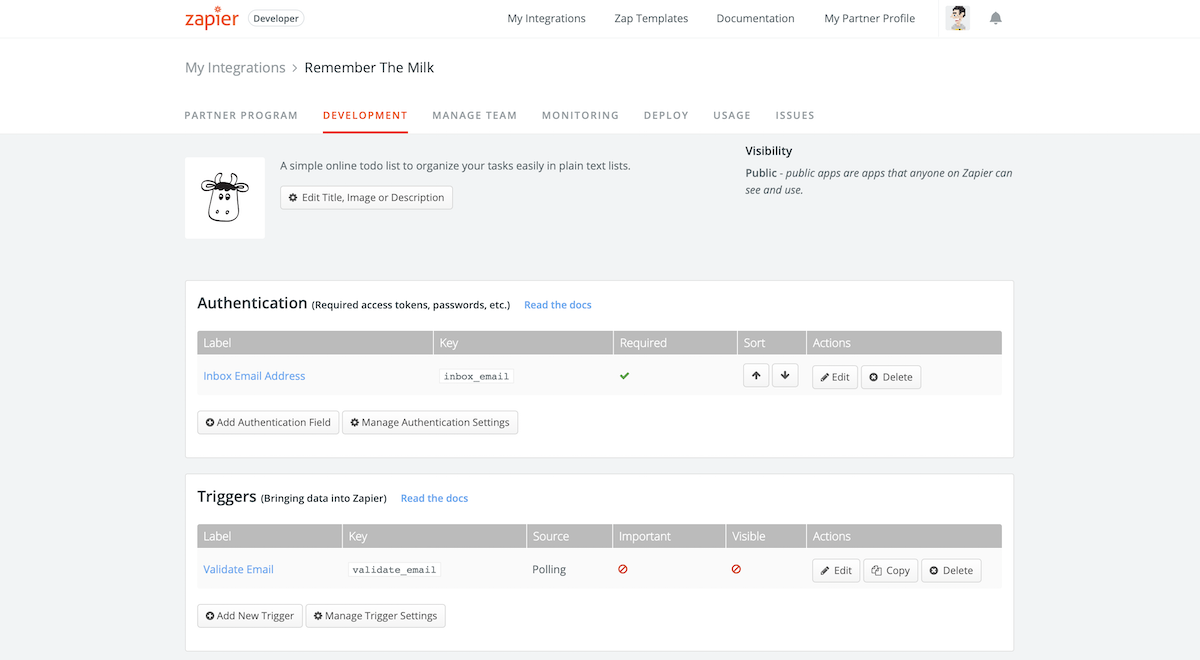 How to Build a New Zapier Integration

Want to start over and build a new integration, or add another integration for a new app? That’s easier than ever with Zapier’s Platform UI and CLI.